Background: Programmers spend a significant proportion of their time searching for and making sense of complex information in order to accomplish their goals, whether choosing among between different APIs, adapting code snippets found on the Internet to meet their needs, or trying to learn unfamiliar code to fix an error or add a new feature. When performing tasks like these, programmers continually are making hypotheses, proposing questions, and discovering answers. However, after each sensemaking episode in which a programmer gains knowledge for themselves, their work is essentially lost, with no one else benefiting. Although there are many tools to help programmers find the answers, there are very few tools to help programmers make use of the knowledge gained performing the task, or share that knowledge with others. We aim to help the initial programmer collect, navigate, and organize knowledge to meet their goals, while capturing this knowledge and making it useful for later programmers with similar needs. 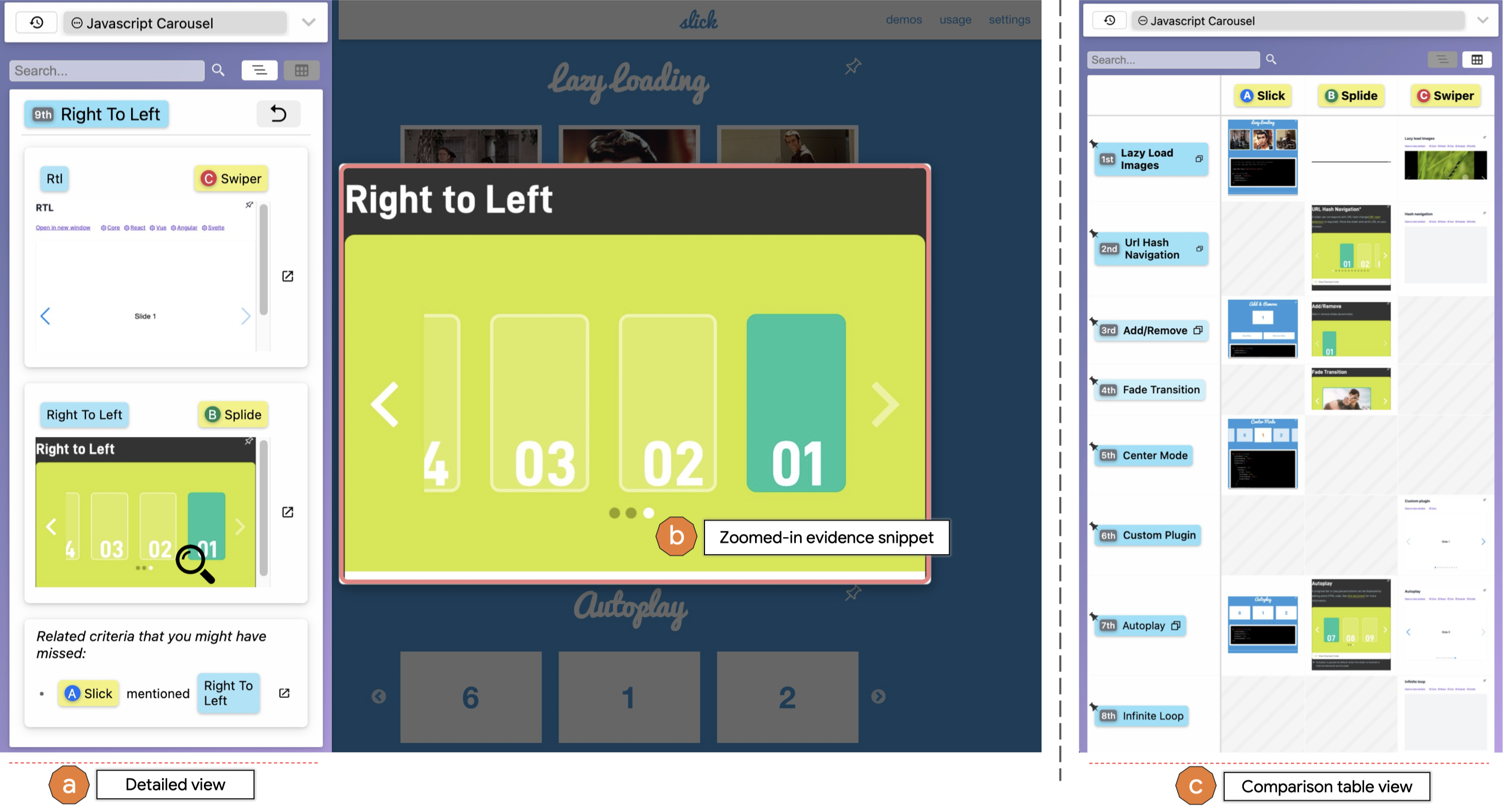 CHI 2022
Crystalline: Lowering the Cost for Developers to Collect and Organize Information for Decision Making
Michael Xieyang Liu, Aniket Kittur, Brad A. Myers.
ACM CHI Conference on Human Factors in Computing Systems (CHI), 2022.
[Abstract][ACM DL][arxiv][Paper PDF][Talk Video]
Developers perform online sensemaking on a daily basis, such as researching and choosing libraries and APIs. Prior research has introduced tools that help developers capture information from various sources and organize it into structures useful for subsequent decision-making. However, it remains a laborious process for developers to manually identify and clip content, maintaining its provenance and synthesizing it with other content. In this work, we introduce a new system called Crystalline that attempts to automatically collect and organize information into tabular structures as the user searches and browses the web. It leverages natural language processing to automatically group similar criteria together to reduce clutter as well as passive behavioral signals such as mouse movement and dwell time to infer what information to collect and how to visualize and prioritize it. Our user study suggests that developers are able to create comparison tables about 20% faster with a 60% reduction in operational cost without sacrificing the quality of the tables. 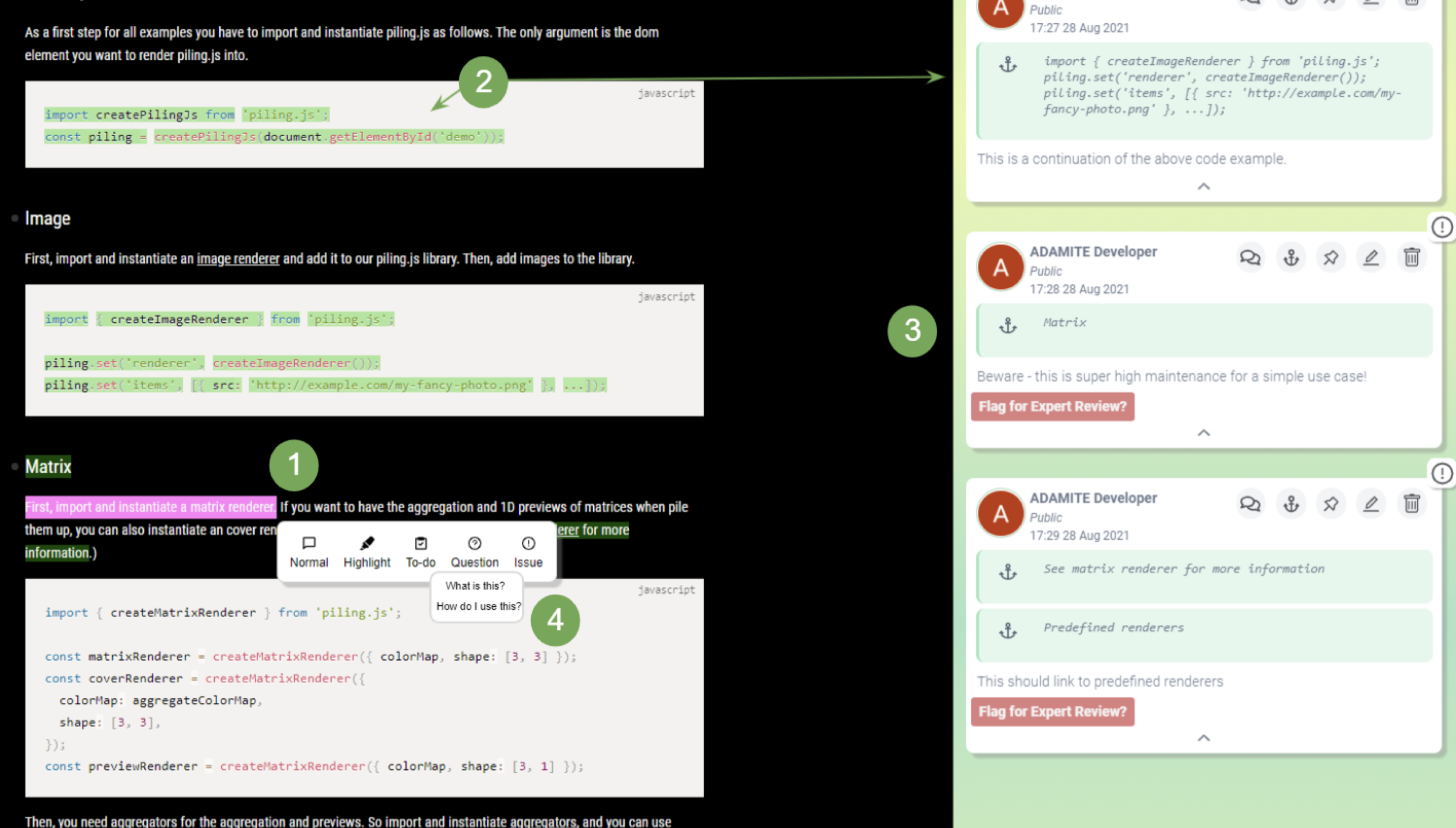 CHI 2022
Understanding How Programmers Can Use Annotations on Documentation
Amber Horvath, Michael Xieyang Liu, River Hendriksen, Connor Shannon, Emma Paterson, Kazi Jawad, Andrew Macvean, Brad A. Myers.
ACM CHI Conference on Human Factors in Computing Systems (CHI), 2022.
[Abstract][ACM DL][arxiv][Paper PDF][Talk Video]
Modern software development requires developers to find and effectively utilize new APIs and their documentation, but documentation has many well-known issues. Despite this, developers eventually overcome these issues but have no way of sharing what they learned. We investigate sharing this documentation-specific information through annotations, which have advantages over developer forums as the information is contextualized, not disruptive, and is short, thus easy to author. Developers can also author annotations to support their own comprehension. In order to support the documentation usage behaviors we found, we built the Adamite annotation tool, which provides features such as multiple anchors, annotation types, and pinning. In our user study, we found that developers are able to create annotations that are useful to themselves and are able to utilize annotations created by other developers when learning a new API, with readers of the annotations completing 67% more of the task, on average, than the baseline. 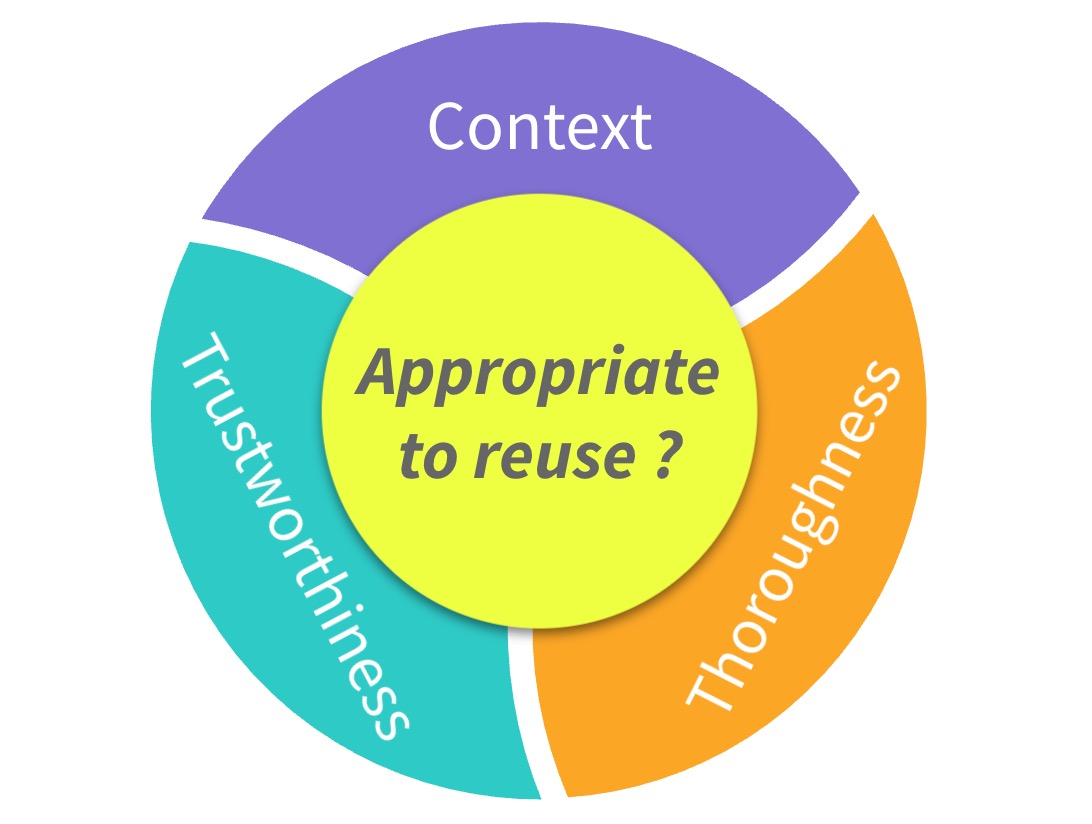 CSCW 2021
To Reuse or Not To Reuse? A Framework and System for Evaluating Summarized Knowledge
Michael Xieyang Liu, Aniket Kittur, Brad A. Myers.
ACM Conference on Computer Supported Cooperative Work and Social Computing (CSCW), 2021.
🏆 Best Paper Award
[Abstract][ACM DL][arxiv][Paper PDF][Talk Video][CMU SCS News]
As the amount of information online continues to grow, a correspondingly important opportunity is for individuals to reuse knowledge which has been summarized by others rather than starting from scratch. However, appropriate reuse requires judging the relevance, trustworthiness, and thoroughness of others' knowledge in relation to an individual's goals and context. In this work, we explore augmenting judgements of the appropriateness of reusing knowledge in the domain of programming, specifically of reusing artifacts that result from other developers' searching and decision making. Through an analysis of prior research on sensemaking and trust, along with new interviews with developers, we synthesized a framework for reuse judgements. The interviews also validated that developers express a desire for help with judging whether to reuse an existing decision. From this framework, we developed a set of techniques for capturing the initial decision maker's behavior and visualizing signals calculated based on the behavior, to facilitate subsequent consumers' reuse decisions, instantiated in a prototype system called Strata. Results of a user study suggest that the system significantly improves the accuracy, depth, and speed of reusing decisions. These results have implications for systems involving user-generated content in which other users need to evaluate the relevance and trustworthiness of that content. 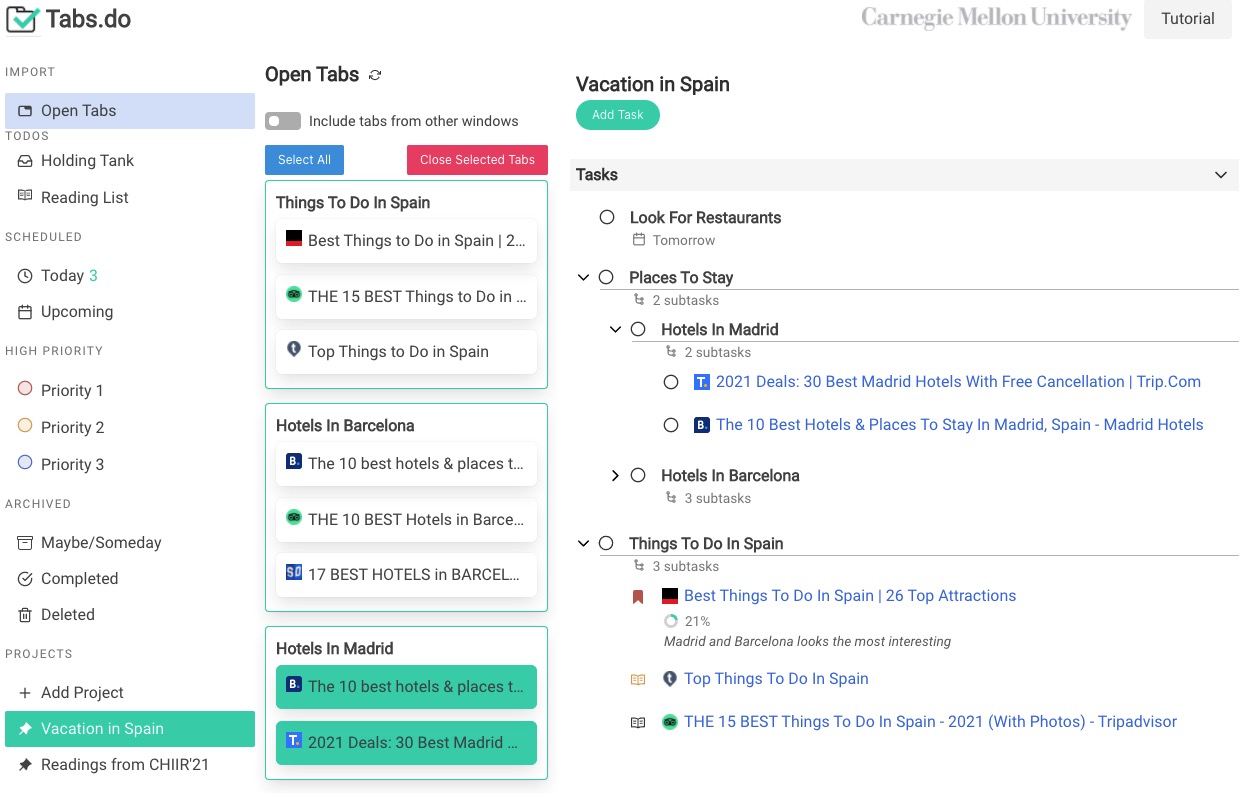 UIST 2021
Tabs.do: Task-Centric Browser Tab Management
Joseph Chee Chang, Yongsung Kim, Victor Miller, Michael Xieyang Liu, Brad A. Myers, Aniket Kittur.
ACM Symposium on User Interface Software and Technology (UIST), 2021.
[Abstract][ACM DL][Paper PDF][Talk Video]
Despite the increasing complexity and scale of people's online activities, browser interfaces have stayed largely the same since tabs were introduced in major browsers nearly 20 years ago. The gap between simple tab-based browser interfaces and the complexity of users' tasks can lead to serious adverse effects – commonly referred to as "tab overload." This paper introduces a Chrome extension called Tabs.do, which explores bringing a task-centric approach to the browser, helping users to group their tabs into tasks and then organize, prioritize, and switch between those tasks fluidly. To lower the cost of importing, Tabs.do uses machine learning to make intelligent suggestions for grouping users' open tabs into task bundles by exploiting behavioral and semantic features. We conducted a field deployment study where participants used Tabs.do with their real-life tasks in the wild, and showed that Tabs.do can decrease tab clutter, enabled users to create rich task structures with lightweight interactions, and allowed participants to context-switch among tasks more efficiently. 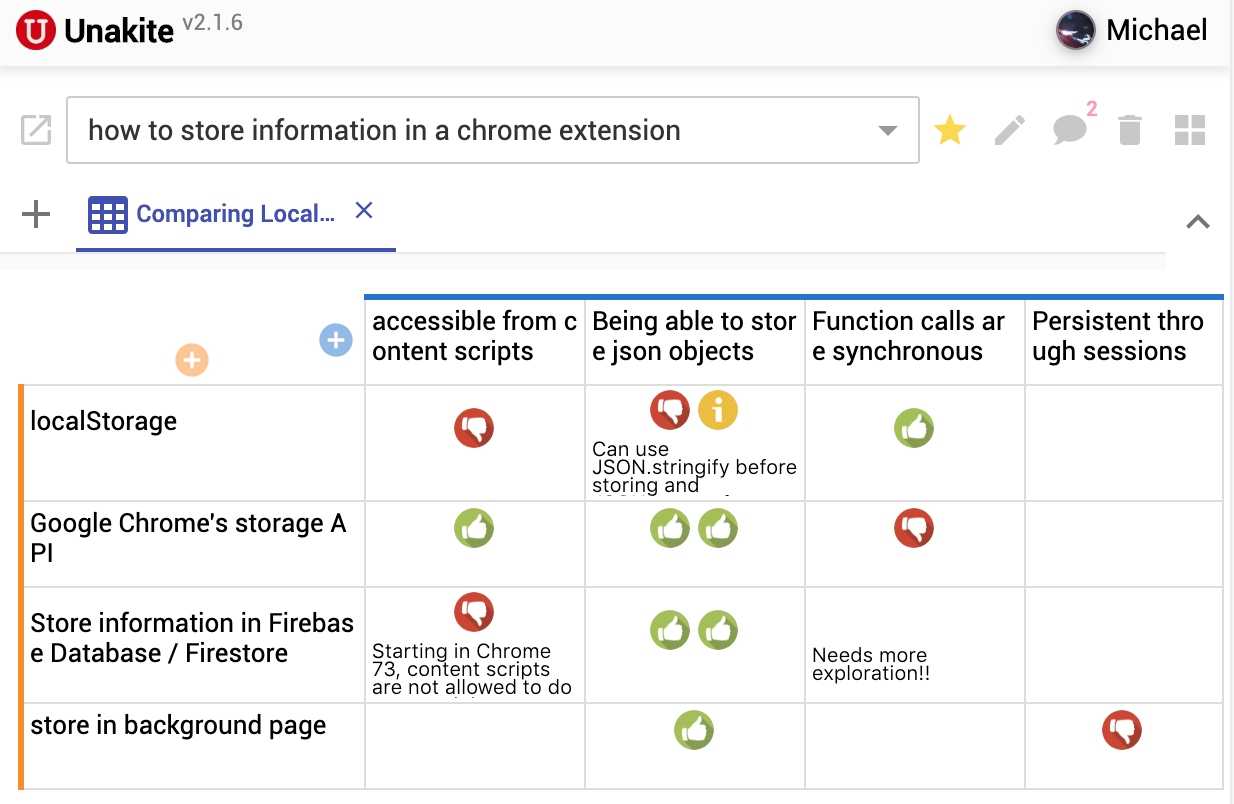 UIST 2019
Unakite: Scaffolding Developers’ Decision-Making Using the Web
Michael Xieyang Liu, Jane Hsieh, Nathan Hahn, Angelina Zhou, Emily Deng, Shaun Burley, Cynthia Taylor, Aniket Kittur, Brad A. Myers.
ACM Symposium on User Interface Software and Technology (UIST), 2019.
🏅 Best Paper Honorable Mention Award
[Abstract][ACM DL][Paper PDF][Talk Video]
Developers spend a significant portion of their time searching for solutions and methods online. While numerous tools have been developed to support this exploratory process, in many cases the answers to developers' questions involve trade-offs among multiple valid options and not just a single solution. Through interviews, we discovered that developers express a desire for help with decision-making and understanding trade-offs. Through an analysis of Stack Overflow posts, we observed that many answers describe such trade-offs. These findings suggest that tools designed to help a developer capture information and make decisions about trade-offs can provide crucial benefits for both the developers and others who want to understand their design rationale. In this work, we probe this hypothesis with a prototype system named Unakite that collects, organizes, and keeps track of information about trade-offs and builds a comparison table, which can be saved as a design rationale for later use. Our evaluation results show that Unakite reduces the cost of capturing tradeoff-related information by 45%, and that the resulting comparison table speeds up a subsequent developer's ability to understand the trade-offs by about a factor of three. 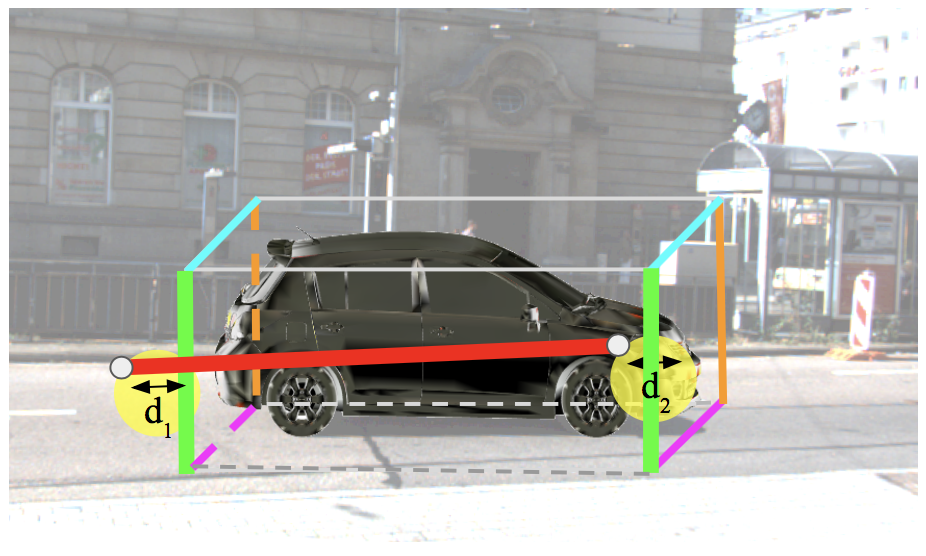 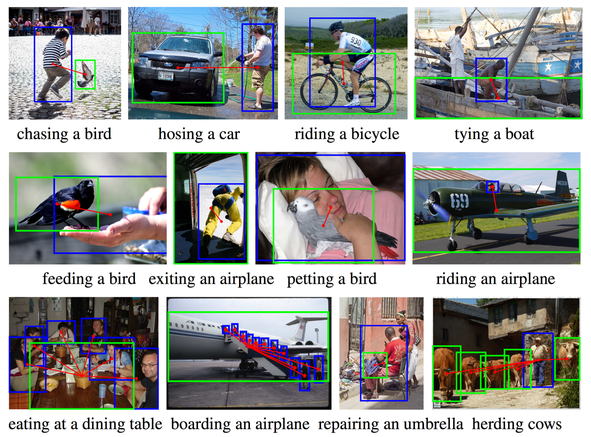 WACV 2018
Learning to Detect Human-Object Interactions
Yu-Wei Chao, Yunfan Liu, Xieyang Liu, Huayi Zeng, Jia Deng.
IEEE Winter Conference on Applications of Computer Vision (WACV), 2018.
[Abstract][IEEE Digital Library][Paper PDF]
In this paper we study the problem of detecting human-object interactions (HOI) in static images, defined as predicting a human and an object bounding box with an interaction class label that connects them. HOI detection is a fundamental problem in computer vision as it provides semantic information about the interactions among the detected objects. We introduce HICO-DET, a new large benchmark for HOI detection, by augmenting the current HICO classification benchmark with instance annotations. We propose Human-Object Region-based Convolutional Neural Networks (HO-RCNN), a novel DNN-based framework for HOI detection. At the core of our HO-RCNN is the Interaction Pattern, a novel DNN input that characterizes the spatial relations between two bounding boxes. We validate the effectiveness of our HO-RCNN using HICO-DET. Experiments demonstrate that our HO-RCNN, by exploiting human-object spatial relations through Interaction Patterns, significantly improves the performance of HOI detection over baseline approaches. 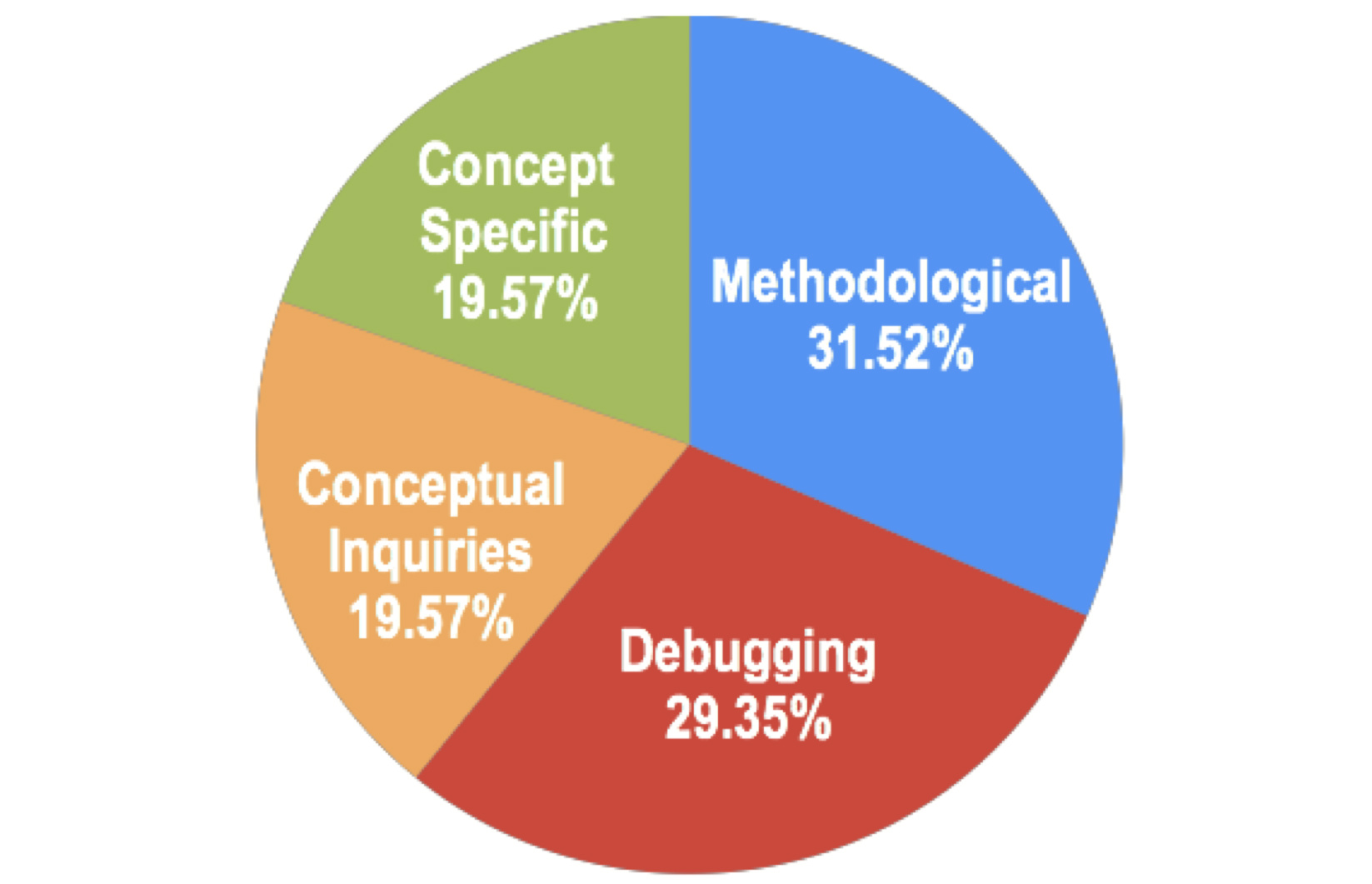 VL/HCC 2018
An Exploratory Study of Web Foraging to Understand and Support Programming Decisions
Jane Hsieh, Michael Xieyang Liu, Brad A. Myers, Aniket Kittur.
IEEE Symposium on Visual Languages and Human-Centric Computing (VL/HCC), 2018.
[Abstract][IEEE Digital Library][Extended Abstract][Poster]
Programmers consistently engage in cognitively demanding tasks such as sensemaking and decision-making. During the information-foraging process, programmers are growing more reliant on resources available online since they contain masses of crowdsourced information and are easier to navigate. Content available in questions and answers on Stack Overflow presents a unique platform for studying the types of problems encountered in programming and possible solutions. In addition to classifying these questions, we introduce possible visual representations for organizing the gathered information and propose that such models may help reduce the cost of navigating, understanding and choosing solution alternatives. 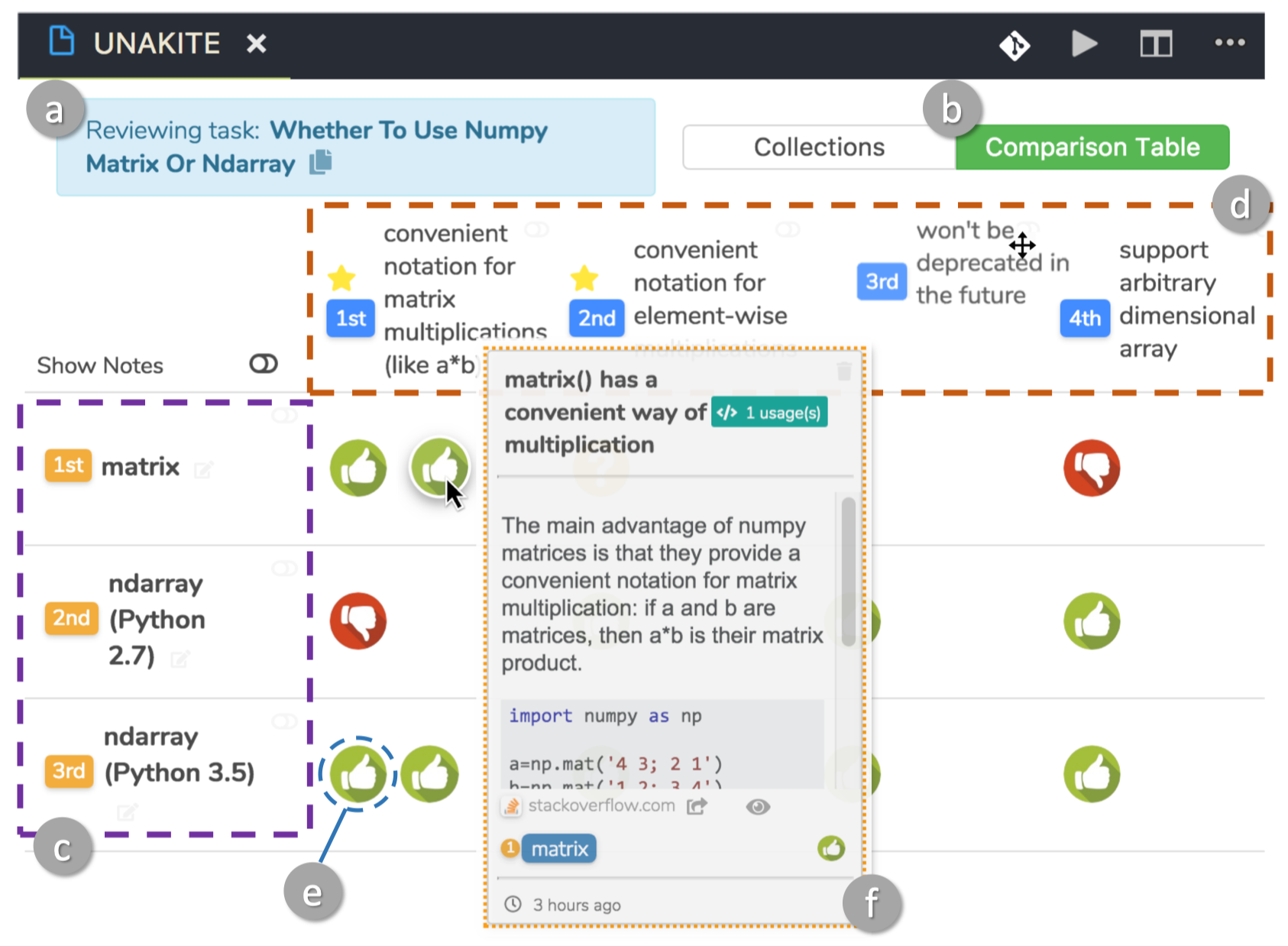 VL/HCC 2018
UNAKITE: Support Developers for Capturing and Persisting Design Rationales When Solving Problems Using Web Resources
Michael Xieyang Liu, Nathan Hahn, Angelina Zhou, Shaun Burley, Emily Deng, Aniket Kittur, Brad A. Myers.
DTSHPS'18 Workshop on Designing Technologies to Support Human Problem Solving, 2018.
[Abstract][Paper PDF]
UNAKITE is a new system that supports developers in collecting, organizing, consuming, and persisting design rationales while solving problems using web resources. Understanding design rationale has widely been recognized as signiﬁcant for the success of a software engineering project. However, it is currently both time and labor intensive for little immediate payoff for a developer to generate and embed a useful design rationale in their code. Under this cost structure, there is very little effective tool support to help developers keep track of design rationales. UNAKITE addresses this challenge for some design decisions by changing the cost structure: developers are incentivized to make decisions using UNAKITE's collecting and organizing mechanisms as it makes tracking and deciding between alternatives easier than before; the structure thus generated is automatically embedded in the code as the design rationale when the developer copies sample code into their existing code. In a preliminary usability study developers found UNAKITE to be usable for capturing design rationales and effective for interpreting the rationale of others.
CHI 2018
Supporting Knowledge Acceleration for Programming from a Sensemaking Perspective
Michael Xieyang Liu, Shaun Burley, Emily Deng, Angelina Zhou, Aniket Kittur, Brad A. Myers.
Sensemaking Workshop @ The ACM Conference on Human Factors in Computing Systems (CHI), 2018.
[Abstract][Paper PDF]
Programmers spend a signiﬁcant proportion of their time searching for and making sense of complex information. However, they often lack effective tools to help them make sense of the information, turn it into knowledge, or share it with their respective communities. In this position paper, we aim to help programmers collect, navigate, and organize knowledge to meet their goals while capturing this knowledge and making it useful for later programmers with similar needs. We describe barriers and challenges to creating this sustainable cycle, and we explore the design space and opportunities for effective tools and systems.